Today I would like to share one more scenario that happened while I am performing SQL Server Clustered installation.

I was doing some testing on my virtual box and had to install Clustered instance. Unfortunately I entered an IP which was already in use. Interestingly  the installation didn't get failed but at the same time didn't make any progress for very long time.

I thought that it would get fail with the message " Clustered IP Already in use" however this message has been recorded in Detail.txt but somehow the progress bar didn't make any progress. So I ended task from task manager.

After that I kick started installation and this time even though the installation is completed Data quality services and Full text search got failed. This being by VIRTUAL MACHINE I didn't investigate  the reason.

So I went to second node and started Add node however it got failed while performing the rule check "SQL Server Database Services Feature State failed". 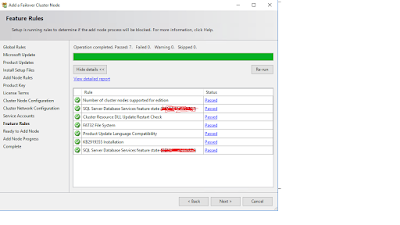 As two of the components on the first node got failed and I didn't take any action on it the SQL Server is smart enough and it didn't allow me to install on secondary node .

Work Around: We need to go to the registry editor on the first node and then change the failed components from the value 2 to 1 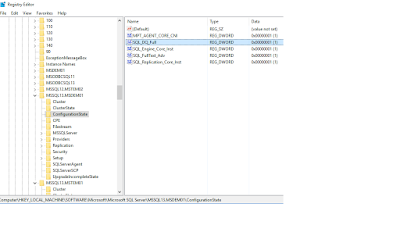 Solution: This being VM I tweaked the registry editor however if we are on the server try to fix the failed components. So I thought of installing only DQS and full text search however looks like it is not feasible once you install Clustered instance. The only way is to uninstall and reinstall. Here are the images which shows the same. 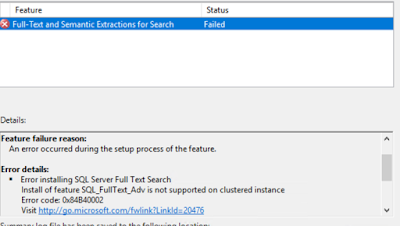 Guys you might ask me a question like why do you need DQS and FULL TEXT search when installing on VM why can't I select only replication and Database Engine.

you know what if you are installing Clustered installation from command prompt by launching the command  line switches /Action=InstallFailoverCluster /UpdateSource=<path to Servicepack EXE> then you can't uncheck them. seriously you can try this and let me know if you agree with this.
Clustering